One Campaign Present U2 Sunday Bloody Sunday for people In Iran


Last week, on a rooftop in New York City, the band recorded an acoustic performance of  'Sunday Bloody Sunday' - and dedicated it to democracy in Iran.

The track is part of ONE's campaign to harness the power of protest songs to demand action against extreme poverty at the G8 summit.

Remember the amazing reaction to Sunday Bloody Sunday on the 360 tour?  Every night it went out in support of the Green Movement that sprang from the 2009/10 Iran elections. The response from across the world - including in Iran - was phenomenal.

As the 2013 elections approached, the band were asked by Iranian human rights activists to contribute their music again.  As Bono says, at the beginning of the performance, 'Greetings from New York City to the good people of Iran...'

Please open the link of the recording that U2 present to TheOneCampain 'Sunday Bloody Sunday' I re-post this from article from their official website. http://www.u2.com/news/title/sunday-bloody-sunday-for-agit8 Great Job Bono, The Edge, Adam Clayton, Larry Mullen. 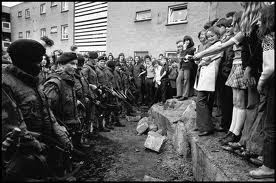