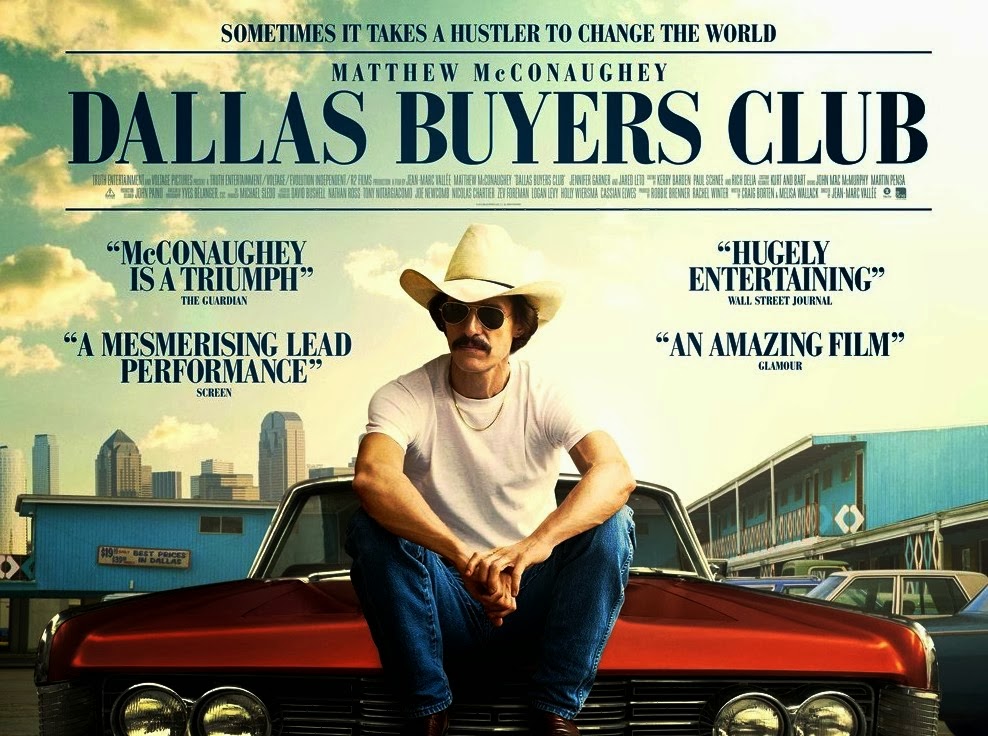 In 1985 Dallas, Ron Woodroof (Matthew McConaughey)— an electrician and rodeo cowboy—is diagnosed with AIDS and given 30 days to live. He initially refuses to accept the diagnosis, but remembers having unprotected sex with an intravenous drug-using prostitute. Ron quickly finds himself ostracized by family and friends, gets fired from his job, and is eventually evicted from his home. At the hospital, he is tended to by Dr. Eve Saks (Jennifer Garner), who tells him that they are testing a drug called zidovudine (AZT), an antiretroviral drug which is thought to prolong the life of AIDS patients —and which is the only drug approved by the Food and Drug Administration (FDA) for testing on humans. Saks informs him that in the clinical trials, half the patients receive the drug and the other half are given a placebo, as this is the only way they can determine if the drug is working.

Ron bribes a hospital worker to get him the AZT. As soon as he begins taking it, he finds his health deteriorating (exacerbated by his cocaine use). When Ron returns to the hospital he meets Rayon (Jared Leto), an HIV-positive transgender woman, towards whom he is hostile. As his health worsens, Ron drives to a Mexican hospital to get more AZT. Dr. Vass (Griffin Dunne), who has had his American medical license revoked, tells Ron that the AZT is "poisonous" and "kills every cell it comes into contact with". He instead prescribes him ddC and the protein peptide T, which are not approved in the US. Three months later, Ron finds his health much improved. It occurs to him that he could make money by importing the drugs and selling them to other HIV-positive patients. Since the drugs are not illegal, he is able to get them over the border by masquerading as a priest and swearing that they are for personal use. Meanwhile, Dr. Saks also begins to notice the negative effects of AZT, but is told by her supervisor Dr. Sevard (Denis O'Hare) that it cannot be discontinued.

Ron begins selling the drugs on the street. He comes back into contact with Rayon, with whom he reluctantly sets up business since she can bring many more clients. The pair establish the "Dallas Buyers Club", charging $400 per month for membership, and it becomes extremely popular. Ron gradually begins to respect Rayon and think of her as a friend. When Ron has a heart attack, Sevard learns of the club and the alternative medication. He is angry that it is interrupting his trial, while Richard Barkley (Michael O'Neill) of the FDA confiscates the ddC and threatens to have Ron arrested. Saks agrees that there are benefits to Buyers Clubs (of which there are several around the country) but feels powerless to change anything. She and Ron strike up a friendship.

Barkley gets a police permit to raid the Buyers Club, but can do nothing but give Ron a fine. The FDA changes its regulations such that any unapproved drug is also illegal. As the Club runs out of funds, Rayon—who is addicted to cocaine—begs her father for money and tells Ron that she has sold her life insurance policy to raise money. Ron is thus able to travel to Mexico and get more of the Peptide T. When he returns, Ron finds that Rayon has died after being taken to hospital and given AZT. Saks is also upset by Rayon's death, and she is asked to resign when the hospital discovers that she is linking her patients with the Buyers Club. She refuses to comply and insists that she would have to be fired.

As time passes, Ron shows compassion towards homosexual members of the club and making money becomes less of a concern – his priority is provision of the drugs. Peptide T gets increasingly difficult to acquire, and in 1987 he files a lawsuit against the FDA. He seeks the legal right to take the protein, which has been confirmed as non-toxic but is still not approved. The judge is compassionate towards Ron but lacks the legal tools to do anything. As the film ends, on-screen text reveals that the FDA later allowed Ron to take Peptide T for personal use, and that he died of AIDS in 1992, seven years later than the doctors predicted.

Dallas Buyers Club is a 2013 American biographical drama film, directed by Jean-Marc Vallée and scripted by Craig Borten and Melisa Wallack. Matthew McConaughey stars as AIDS patient Ron Woodroof, who smuggled unapproved pharmaceutical drugs into Texas when he found them effective at improving his symptoms, distributing them to fellow sufferers by establishing the "Dallas Buyers Club" while facing opposition from the Food and Drug Administration (FDA).

Dallas Buyers Club premiered at the 2013 Toronto International Film Festival and was released theatrically on November 1, 2013, entering wide release on November 22. The film has received general acclaim from critics,[5][6] and has been nominated for and won numerous accolades, most recognizing the performances of McConaughey and Jared Leto, who have received numerous honors, including at the 2014 Golden Globe and Screen Actors Guild Awards, among others. At the 86th Academy Awards, Dallas Buyers Club received six nominations, including Best Picture, and it won Best Actor, for McConaughey, and Supporting Actor, for Leto; it was the first film since Mystic River ten years earlier to receive both awards. It also won Best Makeup and Hairstyling. It has grossed over $30 million in box office revenue against a budget of $5 million.