A Healthy Life Through Soccer For Women Living With HIV

Based on the data of the Ministry of health, about the number of women living with HIV  in 2012 is 4.880 people in Indonesia. Most of them consisting of a housewife And often get violence because Having no activity in addition to take care of the household. Their health condition is often not managed, They were thinking of the family than them self.

Form a group of a sport that focus on street soccer Very helpful to restore confidence and the health women living with HIV. These activities build cooperation, move the entire body, Make a game in football it means of releasing the tired and get happiness. With exercise routines 1 time a week for 2 hours, Not seized much time but Give women room for of expression through sports. This routine automatic will restore The function of metabolism of the body And women with hiv can keep healthy. 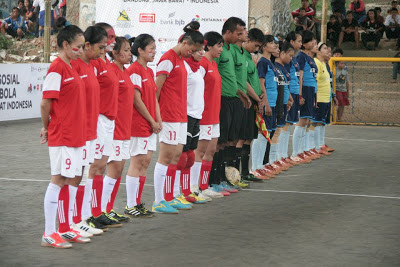 Jakarta Vs Bandung, in League Of Change 2013

The Street soccer team has now is in four provinces in Indonesia, they are Banten, Jakarta, West Java and Jogjakarta, and they active exercise routine. In March 2013, the four-team women's soccer competed in League of Change held by Rumah Cemara in Bandung. This proves that women can also participate in a football match. In June 2013, there will be a woman gala camp which focus on training women to leadership beyond football. All this women now more healthy and they could increase CD4 number to normal.

By the using football we can solve the problems the stigma and discrimination for people living with HIV and routine football weekly exercise. Realize that football is not only a physical exercise, But also how the players interact with each other, How do they play the role of each While respecting the role of others, And how they work together in a team. The issue of HIV and AIDS also illustrates the importance role apply theory in a daily life: no matter you are living with HIV, every individual has an equal position, with duties and rights are balanced.